POUGHKEEPSIE – City of Poughkeepsie police responded to multiple reports of gunfire in the area of 71 Garden Street at 1:05 a.m. on Thursday. Officers located a 16-year-old male in the foyer of 71 Garden Street with an apparent gunshot wound to his arm.

Captain Rich Wilson said his officers immediately applied a department-issued tourniquet to slow the blood loss while awaiting the arrival of the city firefighters and medics from Mobile Life Support Services. The victim, who is not a resident of the city, was transported to a local hospital with what has been described as “serious but non-life-threatening injuries.” Sources say that the victim has been transported to Westchester Medical Center for further treatment.

During the investigation, officers discovered blood on the back porch of 69 Garden Street, located next to the building where the victim was found. 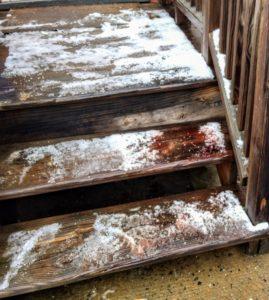 Bloodstains are in the snow on the back porch of 69 Garden Street after an early morning shooting in the area.

The Poughkeepsie Detective Bureau is actively investigating the incident although progress is being impeded by what officials say is “a less than cooperative” victim.

Anyone with information regarding this incident is requested to call the City of Poughkeepsie “TIPS” line at 451-7577.